[Expat voice] Where are you from? 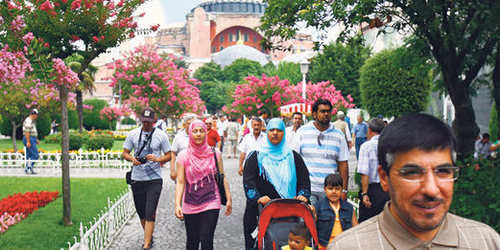 İstanbul is a remarkable place in many ways, indeed. It was historically the “bridge of civilizations.” Today it is home to over 13 million, the majority of whom are Turks, largely of the Islamic faith, although they live in a society that has secularized significantly since the early 1920s. İstanbul was once the center of the Muslim world, and the Ottoman caliphate existed for over 600 years, longer than any other caliphate. Presently, the economy of Turkey is performing rather well, and the rise of the “Islamic bourgeoisie” has ensured the vitality of the wider nation, rather than the elite urbanite secularists and liberals who, until recently, traditionally held economic and political power. Many Turks consider themselves part of an extraordinary heritage of Turkishness, with its progressive Islamism at center-stage. Other Turks wish to be Europeanized, and rapidly so with individualism, urbanism and internationalism replacing existing notions of collectivism, traditionalism and localism. These are important sociological developments in a society undergoing dramatic changes in the light of globalization and the opening up of media and politics. While these advances are important for Turkish society and as someone who has had a lifetime to determine the important questions in relation to identity as a British Pakistani Muslim, living and working here as a foreigner has caused me to revaluate some of my thoughts. Almost every day I am asked the same question by those I meet for the first time. Each time I am asked, I ask myself if I really know the answer. All kinds of İstanbulites ask me, “Where are you from?” and each time they do I have less and less of an idea as to what to say. I sometimes give a different answer just to prevent the monotony as I have a good idea of what will follow. But the norm is for me to say, “I am from the UK.” They immediately then ask, “Where?” and I say I am from England and they say, “But…” and start to point at my hands, suggesting that I have brown skin. I then say, “My parents are from Pakistan but I am British-born,” and they say, “Ah… you are Pakistani.” I say: “No, I’ve spent no more than three months in Pakistan over a period of 41 years. I am sometimes treated like a tourist there.” This creates disquiet among the questioners, who do not know how to respond to the idea that I am something of a dislocated Pakistani, perhaps unsure of myself, even. Smiles are usually exchanged at this point as it becomes clear to both of us that we are not speaking the same language at all. Whether it is the local baker or one of the attendants at my favorite coffee shop in the center of Avcılar, the next thing said is a statement that I am asked to affirm, “So you are Pakistani?” I reply, “Yes, in that I have Pakistani blood, but my heart and mind are quite English.” Being an ‘Englishman’…..
Via www.todayszaman.com

This WordPress.com site is the bee's knees

Learning for Sustainable Quality of Life

Info on #FNPP1 and Irradiation

Culture of Life News: the blog is mightier than the sword. Ruthless analysis of history and modern events.

What we need is--data and data literacy

Things to do on the internet.

What was known and when.

NOTE: Blog items here about the Epstein case are unsuitable for minors.

Info for/by people in the Bay Area who are against nuclear renaissance. カリフォルニア州ベイエリアで原子力ルネッサンスに反対する人々による、人々のための情報